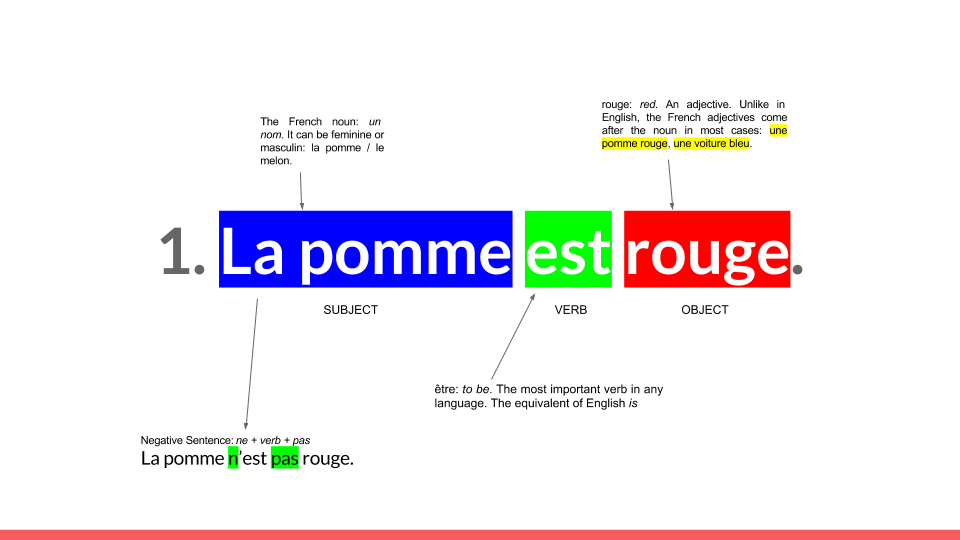 You may have heard about How to Learn (But Not Master) Any Language 1 Hour article by Tim Ferriss. Here is a quick overview of his approach and how it applies to the French language. You can also test yourself in deconstructing the French grammar at the end of the article.

So if you are interested in deconstructing the French language Tim Ferriss’ way, you may dig right into it.

* Even though it is highly unlikely to hear this kind of sentence in France (it is more probable to encounter something like La pomme, est-elle rouge ? or Est-ce que la pomme est rouge ?) the subject / verb inversion to create a question is correct but rather formal and rarely used in speech.
** When it comes to expressing obligation in French, it is more common to use the il faut que structure. Eg. Il faut que je la lui donne !

Learn any language by deconstructing it, that is by stripping the language you want to learn to (almost) its bare bones and finding all the positive and negative for you aspects that you can turn into your advantage.

The good thing about this approach is that it gives you a rather global view of the basic grammatical structure of the language to learn. You get the impression of grasping the language, and thus the quantity of grammar to acquire less daunting. Its strength lies, in my opinion, in outlining the core of a particular grammar and thus the language itself. It is much easier to go further into details later on as opposed to trying to grasp every detail from the very beginning and quickly run out of your steam, a very common pitfall for all foreign language learners.

The concept itself is nothing new in the way it approaches the understanding of the mechanics of any given concept. Let’s take learning any computer programming language for example: the most general teaching method consists of explaining the basic concepts (variable declaration, managing strings and numbers, control flow, lists or arrays, etc) which are common to all of the programming languages but which structure may be expressed differently in each of them.

Nevertheless, the idea is somewhat new in teaching a foreign language as it compresses all of the grammar of the language into the most basic but also the most relevant things that will make the learning easier for us. We obtain an insight into what is already familiar to us, i.e. what the language(s) we know has in common with the one we want to acquire and what differentiates it from our native tongue(s).

As far as the usefulness of the French language deconstruction is concerned,  I’m leaving it to your own judgement. I can only hope you will find it useful.

Please, tell what you think about this French language deconstruction in the comments section.

PS: Don't confuse this article with the deconstruction, a philosophical and literary notion coined by Jacques Derrida, a French philosopher.

This site uses Akismet to reduce spam. Learn how your comment data is processed.